凯利McQuain:  米奇，编辑找过我. We’ve known each other since doing our MFA at the University of New Orleans. 我很久没有写小说了. 这几年我一直在写诗歌和散文, and though I was a little shy at first I decided this might be a fun way back into writing fiction. 这是.

维多利亚詹森: Greg Frost brought me on board, when one of the other writers cancelled. 格雷格和我曾经一起在一个工作室.

Tell me a little about the characters and story in your chapter.

凯利McQuain:  I wrote chapter 6, and it seemed each chapter that came before introduced a lot of new characters. I wanted to bring back or mention as many characters as I could so that there would be a sense of continuity and development. 这就是我喜欢大演员阵容的书的原因, to see the way the characters’ stories weave in and out of those around them. As this was near the midpoint of the novel, I thought it was important to do so. 当然, to pull this off I had to add a new character that I hoped a later writer might further develop. 阿尔萨德是他的名字, a college student who sheds some light on the backstories of some of the other victims. I also wanted to add more diversity in terms of race and sexual identity.  我很高兴能有机会让Josh充实起来, the food truck owner whose truck is where the initial murder happens. 他在第一章提到过，但他一直没有出现在舞台上. 当然，他的女朋友安吉拉也不得不再次出现. 就语气而言, 我尽量跟第一章保持一致, 这是一个滑稽的谋杀谜题, both a satire and an affectionate peaen to the City of Brotherly Love.  I also wanted to pin down the passage of time during the fall term, so I set this chapter just before Halloween with a note to my collaborators that I hoped the upcoming holiday might make a good backdrop for a later chapter.

维多利亚詹森: 我的新角色是奥利弗·诺维尔和劳蕾尔·古铁雷斯, 切尔西·西蒙的警察助手, 侦探. I based their personalities very loosely on Laurel and Hardy; their main purpose was to serve as comedic foils. 考虑到我这一章的内容, I thought it would be a good idea to sum up some of the previous action and create a bridge to later events, 在处理另一起死亡案件时. Greg had mentioned he’d created “Pants” to be a murder victim, so I obliged!

托尼Knighton: It seemed to me that the story was running away; I wanted to bring it back around to Angela (I liked her character).  我利用了米奇和米奇太太. DeSantis in another story and thought them perfect for something happening Downtown.

凯利McQuain:  当然! I would have felt like I was being disrespectful to the hard work of the other writers if I hadn’t done so, 我也不会从他们埋下的种子中受益. What was useful to me was the meta-data the editors and other writers helped generate, 这样我就能更容易地追踪角色和事件. A project like this is fun for the wildly different approaches you see in what gets turned in, but to me it also emphasizes that for my own writing projects the importance of timelines, 绘制图, 并对作品的衔接进行概述. 这个项目, 它的性质, 以一种有趣的方式打破规则, but at the same time it served for me as a reminder of why those rules are there to begin with.

维多利亚詹森: 在开始写作之前，我确实读了前面的几章. I tried to make my chapter build structurally on what went before while providing a launch point for succeeding chapters. 我没有尝试去匹配风格, because I figured the different authorial voices were a feature, 不是一个错误.

What have you noticed about writing for a serial novel and how it influenced the overall story?

凯利McQuain:  I had to make peace with the fact that the set-ups and characters I liked the most wouldn’t necessarily be embraced by later writers, 谁把船驶向他们自己的方向. A serial novel is not going to be as tight or as streamlined as an Agatha Christie novel. 乐趣在于方法的多样性. I think what the overall novel becomes is a portrait of how 13 writers see Philadelphia at this moment in time. 我最喜欢的部分是365安卓官方app下载如何讽刺这个城市, how we critique its legal system and the exploitation of adjuncts on campuses throughout the city. How we poke fun at beloved low-brow cuisine like the cheesesteak as well as at Philly’s restaurant renaissance. How we even poke fun at the genre of mystery writing itself when the novel takes a possibly meta turn. A huge amount of geographical territory is also covered in the book. 宾夕法尼亚大学的凯利作家之家(Kelly Writers House)也有这样的场景, 在德雷克塞尔龙酒吧, 费城社区学院和坦普尔大学. Rittenhouse Square, South Philly, Strawberry Mansion, and so many other places also make appearances. The novel’s definitely a portrait of the city’s people and its places.

维多利亚詹森: I discovered how very useful it can be to keep a list of characters and their salient characteristics. 我以前做过几次轮转, so I was prepared for later authors to radically depart my expectations for the story.

托尼Knighton: I haven’t yet read the subsequent chapters; I want to read the story all at once.

I was less surprised by the direction in which my characters were taken (and other people’s) than I was in my desire to still want to know more about them by the novel’s end.  Several of these characters are interesting enough to drive their own books. One of the things that surprised me was that a project designed to be set in Philadelphia would ultimately end up somewhere else. But as for where… well, dear readers, you will just have to read and see. 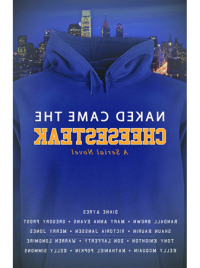