A Funeral for Horace

Horace. An ugly name. The music they’re playing at the funeral is annoying. She’s sad. A little bit, maybe an emotionless sad, cold like a Chicago winter, but hollow and bitter, an almost obligatory sad, as if some downtrodden and suppressed human impulse was finally trying to escape the deep recesses of her being, stimulated [...]

I don’t remember when the panic attacks began, but I remember where. The first one hit as I ascended the deck of the Delaware Memorial Bridge, the twin span across the Delaware River connecting Delaware to southern New Jersey, a bridge I’d driven across hundreds of times over the past twenty years. My mouth began [...]

How to Get Lost

The first step is to fall in love with the only boy that ever remembered your name. His charmed smile and kind eyes wage a coup against reason and you don’t even notice. Ryan snakes an arm around your waist and your heart flips. “I like that you have some meat on your bones,” he [...]

I had this idea I would write about the old aquarium in Camden, not the new. The old one had indigenous fish that live in the slate grey waters off New Jersey– the kind few deigned to see.   That is why they renovated the place. Set aside or killed the flounder and bass  and [...]

At Your Tribute: A Black T-Shirt, White Letters: “Not Dead Yet”

We forgot to water, we forgot to open the flue, so the living room quickly filled with clouds, smoky gray, a locomotive engine had taken a wrong turn, ending up against your parents’ figurines, gold frame caught in mid-undulation, draping over the fireplace mirror,  bubbling milky-blue paint and the bar wheeled in for special occasions. [...]

Once Each Year We’d See Them Dance

on their anniversary to a song from the forties, sisters singing harmonies, horn pops, a muted-trumpet or clarinet soloist, the television turned off, he in his bed shirt, laughing, she in her nightgown, bare arm softly draped around his back, the other arm letting him take the lead for once, hands clasped, turning slowly in [...]

The Thing About My Ears Is

I am afraid of noises miles away. It’s like presence in a room filled with jazz claps bangs all active at once— fifty people talk in chorus. Simultaneous listen makes my tasks impossible and activation of the switch switches on the panic trigger. The whisper approaches from the room downstairs smells lights vibrations   pseudo- [...]

I’m sitting here ankle deep in the brown blues of this creek, hoping the slim oak board bridge we made doesn’t break. Yoda is completely absorbed by the colors in the water near the gray rocks a few yards ahead of me. His chocolate fur always seems clean even after his usual afternoon dirt bath. [...]

Three Blues on The Delaware 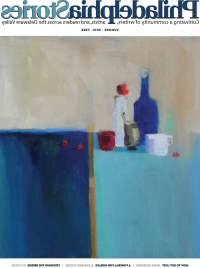